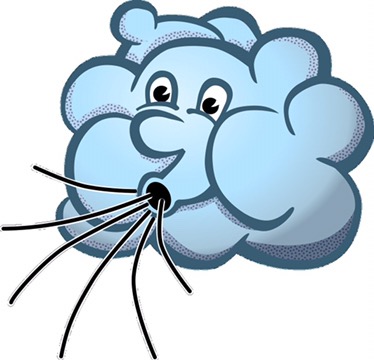 This is a perennial topic for the staff room or playground duty. As Storm Doris approached the UK many a veteran teacher was predicting that the strong winds would  lead to some challenging behaviour.

But is there any evidence that high winds do affect children’s behaviour? I’ve often wondered and a took the opportunity to collect some data on wind speed (published by the nearest weather station) and the behaviour incidents logged at our school over the last two school weeks, one of which featured lower wind speeds, the other higher speeds as Doris passed over the UK.

I’m not sure exactly what that shows, it isn’t a lot of data, and it isn’t a precise measure of misbehaviour (‘incident’ covers everything from homework not handed in to having to be removed from a lesson), but it doesn’t look like any kind of convincing correlation. Another interesting point is the positive side of behaviour – we gave out 12% more achievement points in the Doris week than when wind speeds were low. As for every week in school, the number of achievements recorded far exceeded the behaviour incidents, with teachers giving out over ten times as many positive achievement points as negative behaviour ones.

In Oxford we were only on the southern edge of the storm, maybe the effect would be greater further north. Anyone want to share some data?

What does published research tell us?

I had a brief look at the range of research on this topic (incidentally, it’s best to avoid typing ‘wind’ and ‘children’ into a search engine unless you’re researching flatulence). There are several ideas as to how high winds could affect behaviour including change in air pressure associated with storm fronts, extra-low-frequency atmospheric pressure oscillations,  increased sensory stimulation, and an increase in positively charged ions. I didn’t explore this last one because the ions are created by hot, dry winds and that doesn’t apply to February in the UK.
Bill Badger and Eric O’Hare of The University of Lancaster researched the effect of weather on the behaviour of students at a secondary school in Cumbria in 1989. They found that behaviour was affected by weather but by changes in the prevailing conditions, rather than the type of weather itself. You can read the abstract here. In a US preschool study in 1990, Eva Essa, Hilton & Murray found that stormy, unsettled weather caused children, especially girls, to interact more with other people than toys (abstract here and paper free if you sign up). A small lab-study by Delyukov and Didyk in 1999 showed that artificially produced pressure oscillations reduced attention. This methodology created lovely controlled, replicable, conditions (abstract here) but was perhaps a long way from the conditions we experience teaching Year 9 on a windy wet  Wednesday lunchtime.

So, research suggests that changes in weather and atmospheric pressure do affect children (and adults), but there isn’t a clear link to increases in ‘wild’ behaviour at school.

If you’re interested in involving students in the topic the Met Office have produced a maths investigation for use with their Weather Observation Website.

5 thoughts on “Do windy days wind children up?”