The end of November marks my first year of blogging. It’s something I’d been meaning to start for a while, but hadn’t my gaged to start – nothing worse than a blank white screen.

What gave me the push I needed was a visit to school from Mary Myatt and particularly the training she gave on objective lesson observation feedback. You can read that first post here: Lesson observation feedback. I notice that I opened by saying that it was a contentious issue. We are getting used to feedback without grades now but having since had an Ofsted inspection, it’s clear that not everybody has had the same training Mary gave our staff!

I’ve found the process of blogging very helpful. Sometimes it’s been a useful way of organising my own thinking, at other times it’s been a record of the work I’m doing at school, and occasionally it been an opportunity to share something close to my heart (this post is an example: Supporting refugee children). For all those reasons I’d recommend starting a blog to any teacher. At the very least you create a record you can refer to later, or use it as a way to clarify your reflections. The best part however is that what you write may help others.

Clear differences have emerged in which posts others read. To date the top five topics are:

I’ll let you draw your own conclusions, but as I write this in the last hours of November 2015, finding a few moments to mark my blogging anniversary (and looking at all the unfinished draft posts & ideas), I don’t find it surprising that workload is the top topic – with almost twice as many views as anything else!

I hope what I have written over the past year has been helpful to others. Thanks for your support everyone who has read this blog, but especially those who retweeted, favourited, or reblogged. An extra thank you to those of you who took the time to comment – I really appreciate it and you have made me try to comment more on the blogs I read. To return to where I started, a little feedback helps us all to improve!

Here’s to the next year of blogging. 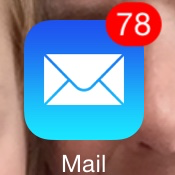 I posted this originally at the start of November 2015 and then updated the post at the end of the month with some thoughts on how the strategy was working – see the end of the piece.

I recently read this article by Kevin Kruse writing in Forbes magazine on dealing with email: How millionaires manage their email. Now, I chose to be a teacher, so obviously I don’t have any interest in becoming a millionaire, and I’m not a subscriber to Forbes (thanks to Maryanne Baumgarten, @mabaumgarten, for tweeting the article). Nevertheless, I get a mountain of email each day and I’ve been trying to find a way of dealing with it more effectively. This seemed as good a place as any to start.

The author had reviewed the email habits of business millionaires and concluded that there were five basic rules to using it productively.

So, after the half-term holiday, I thought I would give it a go. Here’s how I’m doing after a week:

1. Unsubscribe from newsletters. Not sure about this – I like having information pushed to me rather than having to search for it. I find some newsletters invaluable, such as the weekly ‘schools news’ from the LA. On the other hand I do find I delete or archive some others after a glance because the content replicates what I’ve seen before, so I need to be more selective. Some ‘newsletters’, though are just disguised adverts – out they go!

2. Turn of all notifications. Yes yes! Still there’s that temptation – what if I miss something? I’ve decided I’m more likely to miss something important by being distracted by email than by having to look each time my inbox pings.

3. Think twice about forwarding and copying others in. “Sorry for the mass email”. It may be worse saying you know you’re copying in 200 people who don’t need to know, then still doing it, than just doing it! Mail groups save the sender a bit of time but most systems are now predictive and it doesn’t take long to put the few names I actually want. When copying in, I am trying to be more discerning, finding the balance between who needs to be in the loop and reducing the email load I create for others.

4. Keep emails short. I found myself writing an email this week and as it got longer, thinking ‘I should write this as an attachment’. If it’s a document others need to consider, I realise it’s easier for all of it’s an attachment. What I find harder is the balance between brevity and courtesy. I like to put a proper salutation. If I haven’t been in touch with someone for a while, I’ll enquire how they are. I’ll then add the main content and sign off with, for example, ‘best wishes’. When I receive emails that don’t include these courtesies, I can feel a bit miffed. But of course, that won’t be the sender’s intention: they are a busy person and the shorter email is just more efficient. If it’s an answer to something I’ve asked, then I’ve got what I wanted. The balance I try to strike is include the courtesies first, but then subsequent emails in a thread can just follow on without salutations, etc, as in a conversation. One caveat: there’s a special place in hell for people who abbreviate ‘best wishes’ to ‘bests’.

Process emails in 20 minute periods. This one is fun! I’m trying to do it in three 15-minute blocks each day because my colleague @nickjohnrose has been encouraging me to use a time management system of dividing the day into 15 minute segments (this is a variation of the ‘Pomodoro Technique‘ invented by Framcesco Cirillo).  I enjoy dispensing with a full inbox in this time and the ‘four Ds’ seem to be working quite well. The problem is that when I need to write an email to someone, I find myself checking what’s in my inbox – too easy to get caught up! I have also found myself checking my email in an almost involuntary way – I may have an addiction that will prove harder to shake.

One issue is the expectations of colleagues. Up to know I have given the impression that I may respond at various times across the day and am frequently checking mail. They therefore send me messages with this assumption. I haven’t formally declared what I’m trying to do, and why, but perhaps it’s only fair that I do.
November 2015 Update

I’ve given it another couple of weeks and despite a few days when my email discipline fell apart, the new approach seems to be making a real positive difference. I did share with colleagues what I was doing and it was received well, with several giving encouragement and support. Consequently, I find I can usually deal with daily email in three sessions, freeing up time for other work. I think it has also made me procrastinate less – I don’t put things off (well, less than I did) but deal with them there and then, or decide it’s not a priority.

So, I’d  recommend giving this a try if you’re finding that email is occupying too much of your life. As ever comments are always welcome. I’d also be interested to hear how you deal with email.