Last year I wrote a post called ‘Progress on behaviour – Haven’t I seen this graph somewhere before’ about work I had been leading on improving the behaviour of pupil premium students for whom we had identified poor behaviour as the main inhibitor to learning. That became my most read post by quite a long margin. The main point I made was that any improvements we achieved were not through a straightforward upward path, but through a messy reality including plateaus and setbacks, with any progress emerging only through perseverance. Here, I’ll discuss what impact our work on behaviour has had on the progress in learning of the children involved.

In my original post I identified three different ‘response types’ among the students involved:

Impact of Behaviour shift on learning

Not surprisingly, any consequent improvement in academic progress followed the same pattern, with the group of pupils who achieved the most rapid turn-around in their behaviour also making the greatest progress.

The graph shows the correlation between shift in behaviour (measured using our school conduct points system) and GCSE value-added (through a simple comparison of prediction and end of year results, using old money A*=8, A=7, etc) for Key Stage 4 students. For year 11 the end results were actual exam results, for year 10 they were end of year assessments. 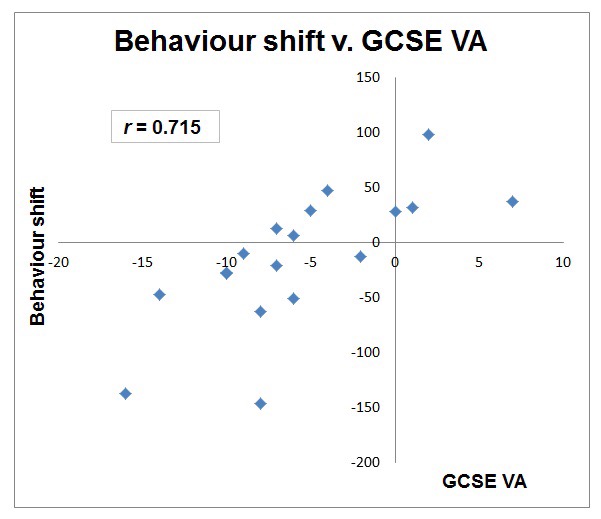 There is a statistically significant positive correlation between improved behaviour and value added (Pearson’s r=0.715 exceeding the critical value of 0.400 for p<0.05, N=18).

Now, I know this isn’t exactly headline news: improving behaviour leads to a better chance of academic success. I do think it’s important. The rocky road of ups and downs that I described in my original post ultimately led to real positive gains for most of the students involved. Remember, they were those with the worst behaviour at the start of the year. This shows us that when the going is tough, and when there are setbacks, it really is worth persevering with these students.

Broadly, the three student response types resulted in these outcomes:

Certainly for group 2, we have taken the view that earlier identification would have helped secure faster improvements in behaviour and better academic outcomes. We drew up our new student groups last term, so we were ready to proceed right from the start of the new school year in September. For the same reason, we’re also making sure we tackle attendance issues much more quickly. The toughest challenge is those students in group 3. We’re working so that our pastoral and inclusion teams are communicating more closely to respond to behaviours that may result from special educational needs, and use behaviours to identify unmet needs. We are also responding to the fact that the group of pupil premium students generally responded more gradually than their peers by making sure that, as a whole school, we our applying our ‘Pupil Premium First’ policy consistently.

My next job is to analyse the progress of the groups we set up because poor attendance was the main inhibitor to learning. As always, I welcome any comments or suggestions you may have.

At the start of September, I wrote my post ‘No more mobiles’ about why we took the decision to ban mobile phones from school. There were several reasons, the foremost being the level of distraction they created. That original post generated quite a bit of interest, so this is my first update on how our decision is going, based on the first week back at school.

On the first day back everything went very smoothly. We had made the decision to give students warnings and literally only a handful them needed a reminder about having their phone out, or headphones round their neck. All responded straight away, a couple saying it was news to them. Several students proffered their phones for safe-keeping at reception in the morning but mostly there was no phone in evidence. It’s likely that most had decided to keep their phone off and in their bag. I only spotted one student at lunchtime with their head almost inside their bag – “I’m just putting it in my bag.” The first day back usually goes smoothly though, doesn’t it?

The rest of the first week continued much the same way however. By Friday several staff reported that they had given reminders / warnings to students, but students had responded quickly and put their phone away. Colleagues also said that students were giving each other reminders not to have phones out.

What surprised me was the lack of complaint or questions from students. I had thought that the new policy wasn’t a change as far as lessons went, but at break and lunchtime, some students would might have difficulty adapting. This just didn’t happen. Apart from the few reminders I mentioned, phones weren’t in evidence in the cafeteria, indoor social area, playground or the field.

So what were students doing if they weren’t on their phones? Talking to each other, face to face, in groups, chatting, smiling, laughing! I also think there were more playing sport, skateboarding, etc. These are just casual observations – most pupils chatted in groups last year, with maybe one in four on a phone at the same time, more were outside playing but we had good weather last week. Colleagues report a ‘renewed focus’ among students, but then it was the first week of the year. We will need to see how things develop as the year progresses.

Did we have to confiscate any phones? Yes, six from five pupils, who did not respond to reminders (that’s  about 0.4% of students). In my first post on this I listed four reasons for our decision to ban mobiles:

In all five cases, confiscation was because of 1 – distraction from getting to a lesson on time – moved to 2 by the students’ choice to ignore a warning. In a couple  of cases there may be a connection to 4, readers will appreciate that I cannot write more on that.

This may or may not turn out to be representative of the year ahead, we shall see. I aim to write another update later in the autumn term. As always, your comments are very welcome. 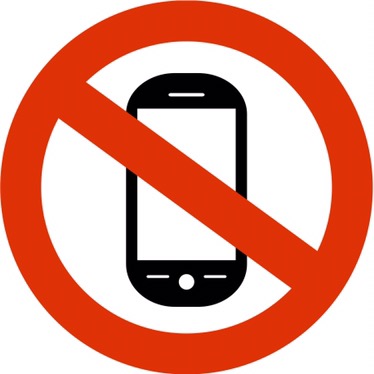 From September we are banning the use of mobile phones in the secondary phase of our all-through school (we have never allowed them at primary). As this is a contentious issue, I’m going to blog about how it works and what issues arise.

This first post is about why we took the decision.

Our school opened in 2003, combining former middle and upper schools. We moved into new buildings in 2006 and opened our primary phase in 2012. We have grown as as school in parallel with the growth in mobile phone use by children and the development of smartphone technology. Up to now our policy has been that mobile phones should be off and put away in lessons (unless a teacher specifies their use for an educational purpose) but can be used at break or lunch.

Last year a team at the LSE produced this paper on the positive impact on exam results at schools which had banned mobile phones – Ill communication: Technology, Distraction & Student Performance. The results were clear-cut and chimed with the concerns that mobiles, especially mobile access to social media were a distraction to students. Nevertheless, we could also see that there could be educational advantages in using this technology, and that we could involve students in the decision. We spent a year monitoring the impact of mobiles. Our Principal spoke to students in assembly about the research on mobiles, how persuasive the evidence was for a ban, and how we would be considering it.

At the end of last term we announced the new rule, publishing it in our newsletter. We took many factors into consideration but four predominated in our thinking:

The most frequent educational uses of phones, outside of computing lessons. were recording homework or for reference (e.g. dictionary, web search). Other resources for these are available to all students.

In view of all this took the decision to ban mobiles in schools. We have addressed parental concerns about safety on the journey to and from school by collecting phones at the start of the day  and handing them back at the end (yes, that has required logistical planning). If a pupil keeps their phone off and in their bag all day we will be none the wiser, of course, but if a phone is used it will be confiscated until a parent / carer can collect it. The exception we have made is students with special needs or disabilities, or who have English as an additional language and use specific apps to help them access the curriculum.

All that has been theory up to now; we start on Monday 5th September. I’ll be posting updates on how it goes. Your comments are always welcome and I’d be interested in hearing how other schools address this issue.